What does the term “progressive” mean to in-house lawyers? In an industry constantly challenged by issues such as innovation and diversity, GCs are having to come up with new ways to engage their workforce and develop the in-house legal function. The Lawyer and Bryan Cave Leighton Paisner held a GC2B roundtable to discuss how best to build a progressive legal team.

Fergus Speight, Royal London Group: A few years ago we in-house counsel used to be quite focused and one would be hired as a specialist. Now, when I look at my legal team, I rely on them to have their connections in the business, which means they need good relationship skills and an understanding of the business.

Also, they have to be able to collaborate among themselves, which is actually quite hard, especially if you hire them from the private practice ‘eat what you kill’ philosophy. There will be a gravitational pull towards specialism but a greater tendency to become more generalist.

That is the tricky bit for people making the jump. They were successful having a particular skillset they could sell. We want to maintain that but move away from it to other aspects. You have to be tough and you’ve got to trust everybody else.

Christopher Barlow, Nomura: The important part is seeing yourself as part of the business. You’re there to further the strategy.

Angela Yotov, Ratesetter: I come from the fintech space, so for me progressive possibly means something slightly different. One of the things I look for is not only technical excellence, it’s fit and agility. If you’re in a fast-paced growth business you want your team to be able to juggle – they might be a finance specialist but if some litigation comes up you want someone who can embrace that. For me, a progressive is someone who is agile and has a specialism, but wants to go deep and grow wide.

Lisa Mayhew, BCLP: Do you look for a particular type or is the culture more embracing?

Greg McEneny, Lloyds Banking Group: There’s something about the legal profession that has a ‘type’. We talk about fit. Lawyers are going through a transition but the mentality has always been ‘let’s be safe’, and lawyers really play into that.

Catrin Griffiths, The Lawyer: It doesn’t always have to be innate though. It’s sometimes about how you’re socialised. It’s about empowering people to ask questions and take decisions.

Dan Kayne, Network Rail: What does an open mindset really mean? For me, it’s someone you can find their place in the business but also show the business they’re more than just a lawyer. If you think about how the legal industry is understood within a wider environment, how many people in this room go to meetings where the conversation all of a sudden dies down?

Haydn Main, Renaissance Capital: The problem I have with recruiting is the business partner vs control function or risk manager thing. I don’t think you can ever get round that: the control function has to come first and people have to understand that’s your priority. You’ve got to be a bit more eyes and ears. It’s a difficult balance but you’re watching the conduct of all the people on the team – you can’t shy away from that.

Robin Macpherson, Cromwell Property Group: Yes, you’ve got to maintain a bit of distance, otherwise, why hire a lawyer? It’s about knowing where that line is. You’ve got to give them the confidence that the rest of the business below them is being controlled by you.

We could help drive the business more than people appreciate”
Diane Franklin, LinkedIn

Dan Kayne, Network Rail: It’s about the person isn’t it? We might bring in an employment lawyer and on day one they will be doing construction work. If they can’t adapt given the skillset they have developed over a period of time, you’ve probably not hired the right person. I want someone who will roll their sleeves up and apply their skills as a lawyer. 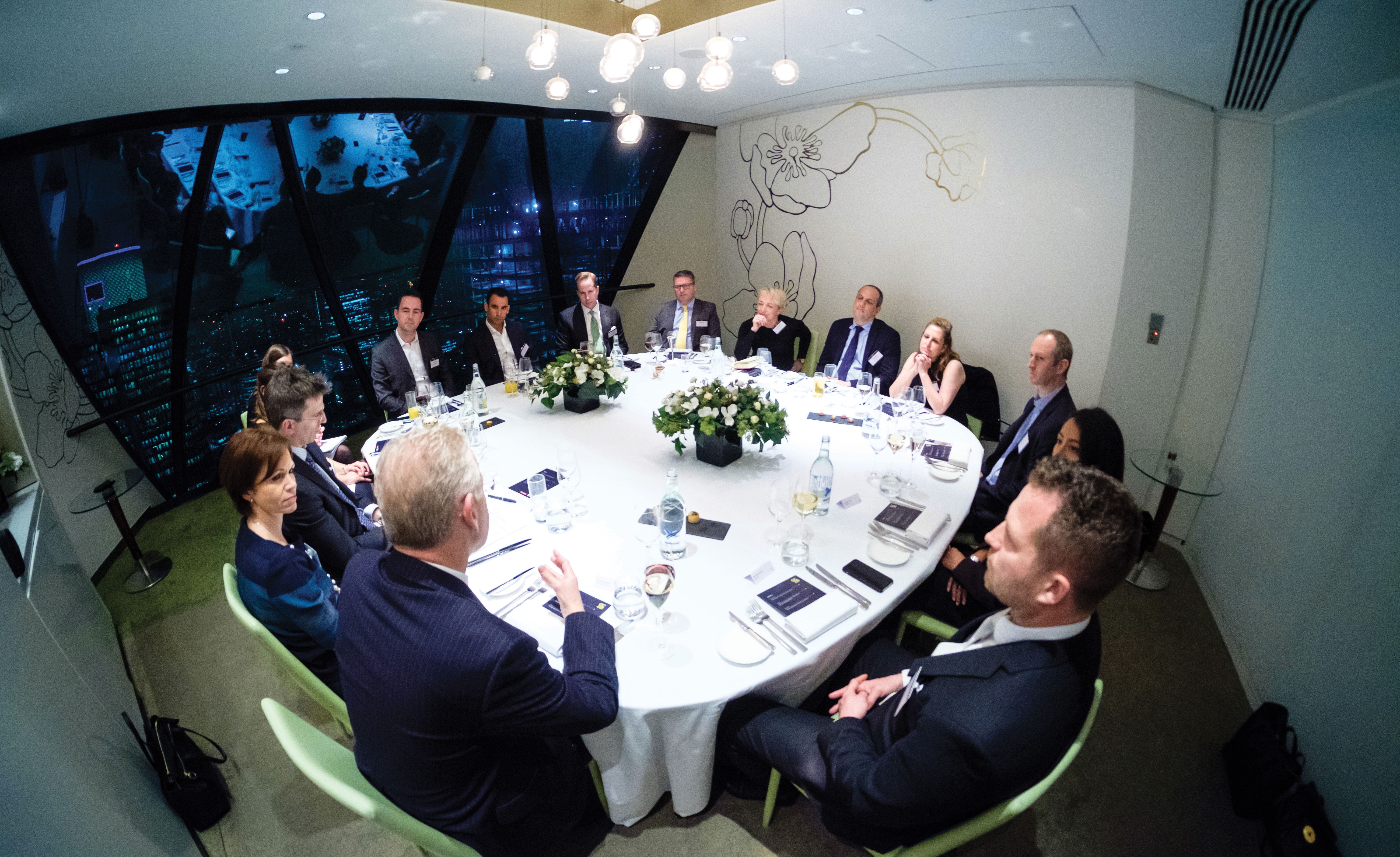 Catrin Griffiths, The Lawyer: Isn’t it also about challenging existing structures? Isn’t that also what we mean by progressive?

Helen Depree, Thales UK: That’s about leadership too. If your head of function is encouraging your team to seek out opportunities and make a nuisance of themselves that’s good – you can’t just expect people to sit around at headquarters and have people come to you. You have to be personable, have a sense of humour about yourself and be challenging.

Michael Astle, Quotient Sciences: There are so many issues that are not strictly legal; gender pay gap reporting for example. We can make an impact in educating the business and encouraging it to take a more holistic view. It’s the same with GDPR.

Michael Sweeney, SEI Investments: GDPR is a great example because some businesses are really struggling with how to do that and they need some heavy lifting. Lawyers are very good at that.

Diane Franklin, RPMI: It’s amazing how much the legal department knows. We could probably be at the strategy table because we know so much from all the departments. We could help drive the business more than people appreciate.

Christopher Barlow, Nomura: I sit on the executive committee and am company secretary. As GC I’m there to advise on a number of things including strategy, pure legal aspects and conduct. Increasingly, people are willing to listen to the legal team because we have a lot of information and we’re involved in an awful lot. The opportunities are there.

Robin Macpherson, Cromwell Property Group: If you’re bright and have common sense you can pick things up. I sit on the European management team not as a lawyer, but as a member of the team so I am part of the strategy and decision-making. I have as much to offer as anyone else.

Helen Depree, Thales UK: I do things with my team about their personal brand and ask how they would introduce themselves to other parts of the business. It’s about them and what they can bring rather than the fact that they are a lawyer.

Dan Kayne, Network Rail: I did a year on secondment with a programme run by someone I knew quite well and the first thing he said to me was “We don’t need a lawyer!” It was incredible to do something outside of the law but bring it back into the legal environment. That, for me, has been the real benefit of doing it. For me, being progressive is running a legal team as a business. I don’t subscribe to the idea that we’re special in any way.

Being progressive is running a legal team as a business. I don’t subscribe to the idea that we’re special in any way”
Dan Kayne, Network Rail

Haydn Main, Renaissance Capital: You can never quite get away from the fact that you’re a control function. Absolutely you’re part of the business, but within that construct of promoting strategy and the business you know where to draw the line. You can help with that, and that is also valuable to any business.

Michael Sweeney, SEI Investments: The control function is extremely important, otherwise people might go ahead and do things they don’t know are wrong.

On the other hand we have innovation targets, mentoring and legal support. We try to keep ourselves innovative. Younger people tend to have a more collaborative approach to things, they’re more used to sharing information and that feeds back to us. You try and get a sense of what’s coming and this is where millennials are useful – it’s instinctive for them to share ideas and think about an ‘open source’ way of working.

Catrin Griffiths, The Lawyer: Is it really a millennial thing? I’m quite sceptical. YouGov says that millennial attitudes are not as usually caricatured. The difference with millennials is that they can’t get a house, not that they necessarily want to rent, and that is what’s driving agile working. It’s not necessarily a mindset difference.

Greg McEneny, Lloyds Banking Group: It’s about how teams work with that type of person. We have one older employee who has all the characteristics usually associated with a millennial and really wants to be in an environment that is fast-paced, and working on a project he loves.

Lisa Mayhew, BCLP: We often think of progressive as meaning young, tech and millennial. I think progressive is having a mix. You can see a world where you have a mix of the young guns and the experienced owls, who are also incredibly valuable.

Diane Franklin, RPMI: Some more traditional lawyers wouldn’t fit into that environment. You have to be careful.

Christopher Barlow, Nomura: In-house has not yet figured out how to keep people on or keep them excited. We’re at a tipping point as to where that can go.

Haydn Main, Renaissance Capital: Going back to Angela’s point about having a team who are smarter than you was very much my approach, but I then came to accept the reality that progression in-house is more difficult than at a law firm.

In a law firm you have a team of creatives and they might all make partner, but they’re not all going to make GC. It’s difficult to process that during the recruitment phase, when your natural instinct is to go for the genius.

Angela Yotov, Ratesetter: I have a small enough team that when someone comes in for an interview, everyone interviews them. While I have the final say, it’s important the team is integrated into the process. This means that the team you end up with works well together. You need people who are excited by doing things differently.

Find a previous GC2B discussion, on UK infrastructure and Brexit, by following this link.